Should you use Userbase for your next static site? 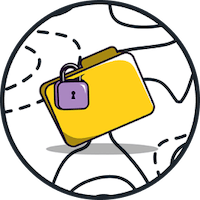 Using Userbase turns out to be pretty useful, at least for this use case.

During the winter 2020 Pointless Weekend, we built TrailBuddy (working app coming soon). Our team consisted of four developers, two project managers, two front-end developers, a digital-analyst, a UXer, and a designer. In about 48 hours, we took an idea from Jeremy Field’s head to a (mostly) working app. We broke up the project in two parts:. First, a back-end that crunches trail, weather, and soil data. That data is exposed via a GraphQL API for a web app to consume.

While developers built the API, I built a static front end using Next.js. Famously, static front-ends don’t have a database, or a concept of “users.” A bit of functionality I wanted to add was saving favorite trails. I didn’t want to be hacky about it, I needed some way to add users and a database. I knew it’d be hard for the developers to set this up as part of the API, they had their hands full with all the #soil-soil-soil-soil-soil (a slack channel dedicated solely to figuring out our soil data problem—those were plentiful.) I had been looking for an excuse to use Userbase, and this seemed like as good a time as any.

A textbook Userbase use case #

“When would I use it?” The Usebase site lists these reasons:

This was a perfect fit for my problem. I didn’t want to write any more backend code for this. I didn’t want to see our user’s data, I don’t care to know anyone’s favorite trails.* A nice bonus to not having users in our backend was not having to worry about keeping their data safe. We don’t have their data at all, it’s end-to-end encrypted by Userbase. We can offer a reasonable amount of privacy for free (well for the price of using Userbase: $49 a year.) I am not tired of dealing with databases, but I’d rather not. I don’t think anyone doesn’t want to simplify their GDPR compliance. Finally, given our tight timeline I wanted nothing more than to keep things really simple.

Userbase can be tried for free, so I set aside thirty minutes or so to do a quick proof of concept to make sure this would work out for us. I made an account and followed their Quickstart. Userbase is a fundamentally easy tool to use, but their quickstart is everything I’d want out of a quickstart:

It didn’t take long after that to integrate Userbase into our app with more help from their great docs. I debated whether to add code samples of what we did here, and I didn’t because any reader would be better off using the great quickstart and docs Userbase provides—they are that clear, and that good. Depending on your use case you’ll need to adapt the examples to your needs, for us the trickiest things were creating a top level authentication context to manage users in the app, and a custom hook to encapsulate all the logic for setting, updating, and deleting favourite trails in the app. Userbase’s SDK worked seamlessly for us.

Is Userbase for you? #

Maybe. I am definitely a fan, so much so that this blog post probably reads like an advert. Userbase saved me a ton of time in this project. It reminded me of “The All Powerful Front End Developer” talk by Chris Coyer. I don’t fully subscribe to all the ideas in that talk, but it is nice to have “serverless” tools like Userbase, and all the new JAMstacky things. There are limits to the Userbase serverless experience in terms of scale, and control. Obviously relying on a third party for something always carries some (probably small) risk—it’s worth noting Usebase includes a note on their pricing page that says “You can host it yourself always under your control, or we can run it for you for a full serverless experience”—Still, I wouldn’t hesitate this to use in future projects.

One of the great things about Viget and Pointless Weekend is the opportunity to try new things. For me that was Next.js and Userbase for Trailbuddy. It doesn’t always work out (in fact this is my first pointless weekend where a risk hasn’t blown up in my face) but it is always fun. Getting to try out Userbase and beginning to think about how we may use it in the future made the weekend worthwhile for me, and it made my job on this project much more enjoyable.

*I will write a future post about privacy conscious analytics in TrailBuddy when I’ve figured that out. I am looking into Fathom Analytics for that.