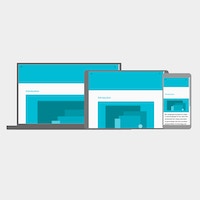 Need help with flexbox, don't like reading specs, but still need good explanations? Here's a rundown of every property and value, with examples!

Flexbox is a layout method that consists of boxes that ... flex. Content is organized in boxes that can grow and shrink in size and be arranged in rows and columns. This layout method allows a site to be responsive, which creates a better experience for a user. The pattern used with flexbox is a parent (also called a 'container') that holds the other boxes, called children (the 'flex items'). There might be one parent and one set of children, or a child might contain its own children. Either way, all you need to know to start understanding the flexbox properties is whether you're styling a container or something inside it.

Flexbox is a one-dimensional layout, meaning its properties and specifications deal with a row or a column. This is different from CSS Grid, which is two-dimensional and lays out both rows and columns at once. By nesting containers and items you can create what looks like a grid layout with flexbox. The flexbox property has been around in various ways since about 2009 and came about as a way to help ease the creation of responsive layouts. While a step up from relying on properties like float, flexbox being one-dimensional limits its potential when it comes to the complex layouts we want for all of the different devices and ways to consume media that exist today. In March of 2017, CSS Grid was released as a full-fledged CSS specification, shipped with major browsers, and has since become the preferred layout method of many designers and developers. It has full support in browsers like Chrome and Safari and has partial support in IE 10 and 11.

So if grid is newer and has become favored over flexbox for many, why bother learning flexbox? Because of its history of use, flexbox is going to be around for a while. Bootstrap, a popular CSS framework, actually relies on flexbox, even for its grid design. Other frameworks may also rely on flexbox, and you'll see it in code you work on yourself. Additionally, because it lacks complete support, you'll need to use flexbox for IE11, or include flexbox fallbacks if you use grid. It's not a matter of learning flexbox or grid, but understanding both and learning when to use each (sometimes even using them together!).

For a thorough discussion and comparison of grid and flexbox, visit the MDN page on the "Relationship of grid layout to other layout methods". For more about how to use the Grid Layout, check out Viget's "Getting Started with CSS Grid" Part 1, Anatomy and Part 2, Three Coding Approaches.

Below is a rundown of parent properties, followed by child properties. We cover what they are, what the value options are, and what they look like. Each property has a JSFiddle below it illustrating what the different values will do. You can click on the JSFiddle and go edit it directly to experiment with the code yourself. For additional resources, check those listed in the "Resources" section.

What is it? The display property is where you tell a stylesheet how it should treat the item you're styling: should it be treated as an inline element? Or block? Or flex? Or both?

By setting display to flex, you're telling your element that it's now a flex container and will have items that go inside it. Note that flex alone doesn't tell a container everything it should do with the items inside it. In the examples below, you'll see that the orange items can actually overflow the blue container they're in if we make it too small. Try widening and narrowing your browser window to observe the changes at different widths. Below, we'll cover flex-wrap, which can help avoid the overflow issue altogether.

There are other languages (and thus writing-modes) that run horizontally right-to-left, and still others that run vertically. Understanding and noting the writing mode and direction you are working in becomes important for internationalization. Interestingly, the different writing modes are why we use start and end when discussing direction instead of only using right and left. For a really deep and interesting discussion on writing modes and CSS, see "CSS Writing Modes" by Jen Simmons.

What is it? The "flex-wrap" property tells your container whether its items are allowed to wrap to the next line, like the lines on the page of a book, or whether they need to stay forced onto one line.

What is it? "Flex-flow" is actually shorthand that combines flex-direction and flex-wrap, so you only need to specify the one combined property instead of direction and wrap separately.

What does that look like? The below examples are for flex-flow: row wrap. We've fixed the width and removed the margin from the left and right of the items so it's easier to see what's happening in space-between, space-around, and space-evenly.

What does that look like? For the examples below, we've added background colors, set the item width at 50px, and given them varying minimum heights so it's easier to see the change in behavior for each value. The flex-direction is row, which dictates what the main and cross axes are. For flex-start, imagine a line going across the top of each box. For flex-end, imagine a line across the bottom. For center, imagine a line going through the center of each box and notice how this affects how the boxes line up with one another.

What are the options? The below values are applicable to your flex-container. For a list of all align-content values and how they affect non-flex layouts, see the MDN page or W3 page.

What does that look like? The definitions for align-content are lengthy, so the best way to see what's happening is to use examples. Carefully compare the differences between align-content and align-items. The align-items property affects both: how items are aligned along the lines and along the cross axis. This difference is easiest to see in the center value.

What is it? The flex-grow property tells an item how much it should grow in relation to the rest of the items in the container when free space is distributed. Unlike other properties, the flex-grow value does not have a unit attached to it. If no value is set, the default is 1.

What are the options? It must be a number, but it can be positive or negative. All you're doing is describing its relation to other items.

What does it look like? Below, we have 4 items arranged in a row. The flex-grow factors for each are 1, 1, 2, and 1. By widening and narrowing your browser window, you can see the items in the JSFiddle grow and shrink. Item number 3 is 2 times the size of items 1, 2, and 4. If you open the JSFiddle you can edit the CSS and test what happens with different values, including negative values.

What is it? Similarly to flex-grow, with flex-shrink you are describing how much an item should shrink in relation to other items in the same container. If no value is specified, it's set to 1. Like flex-grow, there is no unit attached to the value.

What are the options? It must be a number, but can be positive or negative. All you're doing is describing its relation to other items.

What does it look like? Below, we have 4 items arranged in a row. The flex-grow factor for each item is 1, but the flex-shrink values are: 1, 1, 2, and 1. If you widen and shrink the browser window, you'll see what the flex-shrink value does in the JSFiddle as the window changes size; it's most obvious when the window is made very narrow. Watch how item 3 changes in relation to the other items: What happens when you make the browser window as wide as your screen? What happens as you narrow it?

What is it? The flex-basis is the initial size of the flex-item before any other flex factors are applied. If you don't specify it, the default value is 0.

What are the options? You may use the same values as those for width and height, including auto and content. You may not use negative values.

What is it? Like flex-flow for the container, flex is a shorthand for:

What are the options? Like the values it represents, the flex shorthand can have numbers, auto, content, and units for width and height like em. The W3 specs note four of the "most commonly-desired effects" that account for the change in default values discussed above.

What does it look like? Below we have the same 4 items, and by only using flex and a couple values, we see the beginning of a decent layout.

What is it? The align-self property is specific to individual items, where align-items applied to all of the items at once. By using align-self, you can override the settings in align-items as needed.

What are the options? The options for align-self are the same that are available for align-items:

What does it look like? Below, each item is set to one of the available options. To compare with align-items, look at the JSFiddle in that section.

Below are links to more reading and even a couple of games to help reinforce your understanding of flexbox.