Recently, the entire Viget crew jumped in our trusty rental vans for a tradition as old as the company: Third Third Thursday (TTT to those of us on the inside.) TTTs correspond with our Quarterly Recap meetings wherein financials are reviewed and plans for the future are discussed. 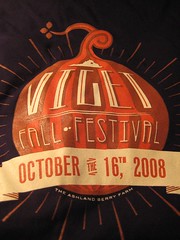 After the Recap, it's customary to have some serious fun. In honor of this short and gorgeous time of year, our team spent the day at the Ashland Berry Farm. The locale was chosen as a midway point between our two offices.

We tugged rope, raced one another for the title of fastest human (Brian won per usual, and earned the crown) and attempted a three-legged race. Of course, there were prizes for winners and treats for all. In addition, Doug designed a Limited Edition tee shirt for the occasion.  We enjoyed some BBQ courtesy of Smokey Pig BBQ and then headed off to pick pumpkins via hayride driven by a guy who calls himself "Mister Smiley." 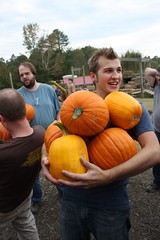 Before we could carve pumpkins, we participated in a lively tradition at the Farm: load your arms with as many pumpkins as you can hold and take three steps. If you can do this successfully, all the pumpkins you carry for three steps are yours for the bargain price of $20. The feats of strength displayed by some members of our staff were pretty impressive.

Alas, the pie eating contest never happened.  Maybe next year?  Getting together as a company every quarter is great fun and a great opportunity to mix with folks from the other office.  It was a fantastic day.