How to Leverage UX Research to Adapt the Sports Fan Experience 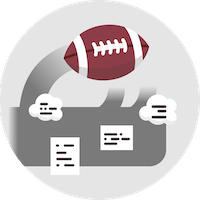 We took a look at how UX Research can help adapt the sports fan experience to a "new normal".

The ongoing COVID-19 pandemic has impacted every industry, from small businesses to large international corporations — you’ll be hard-pressed to find an organization that’s managed to escape its reach. My first career path began in sports and I've been a fan for as long as I can remember. Naturally, I've been paying particularly close attention to how sports leagues, teams, and front offices have adjusted and navigated these uncertain times.

When in-season operations were suspended across most leagues worldwide in mid-March, fans, media, players, and team officials immediately began speculating when/if sports would return. Six months later, international leagues like the KBO League, Premier League, and Bundelsiga, and most U.S-based leagues have ramped operations back up with contingency plans in place to attempt to ensure player and staff safety. The NFL and NCAA have also drafted detailed health and safety protocols for teams that must be implemented in order to give their seasons a chance of starting on time in the fall, with uncertainty around the sport growing each week. The results of these measures implemented by US leagues have been mixed so far and it's clear that the return to normalcy for many sports is likely further out than we hoped. But that doesn’t keep fans, Viget staff included, from talking about what a return to ‘normalcy’ in sports will look like, and what permanent changes may result from this moment in history. This article shares some thoughts on how teams can start thinking about new ways to engage fans who won’t be able to see their teams play in-person for the foreseeable future.

For several years now, the debate between at-home vs. in-person viewing of live sports has intensified. As attendance costs have risen over time, more and more fans have opted for the climate-controlled (and largely free) comfort of their homes, where they can watch their favorite teams and players compete on massive, increasingly affordable, high-definition televisions. Costs can easily skyrocket for a family of four to attend a ballgame after factoring in ticket, parking, and concession costs. It’s likely the pandemic is only going to accelerate this trend of fans opting to watch from home, even when in-person attendance becomes a possibility again. By then, many will come to the conclusion that a seat on their favorite couch is more enjoyable (and affordable) than sitting in a cramped stadium seat in the rafters of an arena.

The question now is, how will teams keep their fans engaged from home? Technology may be able to provide a solution, but what will that look like? In true Viget fashion, let’s explore this through a UX Research-lens. We’ve highlighted three research methods and tools that sports teams could utilize to bring the best parts of the stadium experience to their fans watching from home.

At Viget, we believe that it’s crucial to hear from the intended audience when creating a new experience or product. We find interviews are an effective way for organizations to remotely hear from potential end users, especially while concepts and ideas are still being developed internally. This method is also effective at constructively soliciting feedback regarding user preferences, needs, and goals, while also highlighting issues with the existing experience. Why not interview some of your most loyal, longtime fans and ask them how the organization can supplement and improve their at home viewing experience? You might ask questions like “What do you miss most about watching from the arena?” or “Tell me more about your current at-home viewing experience.” It’s important to also ask more general questions like “How many years have you been a fan” or “How many games do you typically attend each year” to get some additional context.

Individual interviews can prove difficult to arrange on a large scale, and aren’t able to capture the perspective of an entire target audience. Enter the survey. Surveys are common practice among sports organizations when it comes to gathering feedback from fans and season ticket holders. The infrastructure may already be intact, but teams should think more creatively about the questions they are asking. Focus less on identifying the fanbase’s least favorite concession stand, and more on how your organization can bring the audience’s favorite in-person memories and experiences to their home. Within the survey, you’ll want to ask specific questions that generate actionable insights.Use this as an opportunity to find out who they watch or interact with during the game (in-person or even over text/social media), if they rely on streaming or cable to get the broadcast, how often they supplement the standard broadcast with mobile apps/social media, or even what their favorite in-game snack or beverage is. Overall, surveys work well in tandem with interviews and are helpful in identifying trends and data about a broader audience segment.

Moderated observation sessions are valuable when it comes to gathering in-context data during a broadcast and/or validating ideas and concepts once they’ve been generated. Consider remotely checking in with fans as they watch and ask them to walk through their at-home game day routine and carefully look for issues or areas of opportunity. How much time do they spend watching the pregame or halftime shows? How much attention do they actually pay to the broadcasters? How often are they supplementing their viewing experience with social media?

This is also a great option to test concepts and prototypes of new experiences that teams may create during the process. Any level of design fidelity can be used here, the most important aspect is getting the idea in front of users for immediate, real-time feedback.

Within the context of sport, these methods can help validate or invalidate specific ideas for remote fan engagement, and even help teams uncover new ones. Use them to brainstorm ways that the fan experience can be brought into the home and put those ideas to the test through research and validation exercises like the ones mentioned above. Depending on the medium of the new concept or strategy, this may open up new revenue-generating opportunities for teams through licensing and subscriptions, which could make up for a portion of lost ticket and attendance revenue.

While the in-person experience will be difficult to replicate, smart teams and leagues will recognize that fan attendance may never truly be the same in a post-COVID world. It’s a complicated time for sports everywhere, which is why now is the time to start identifying bleeding-edge solutions for reaching fans beyond the standard methods of engagement.The organizations that engage their fans through innovative digital experiences, enhance at-home viewing, and prove that they can deliver substantial value outside of the stadium/ballpark/arena will be the ones that see the most success.