Behind the Jumpscare: The Spooky Statistics in Horror Movie Rankings 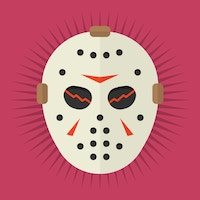 Why do we enjoy movies that are made to scare us? Is it the adrenaline, the feeling it emits, or simply an escape from reality? Using data-informed analysis, a Viget intern shares key findings on what makes a good horror film.

I really love horror movies. For some reason, I prefer a movie about an impending apocalypse or a paranormal apparition rather than a coming of age or feel-good tearjerker. With this in mind, imagine you’re an avid fan of scary movies like me and you go to Netflix to find one. You’re looking through the horror genre and decide to choose between three movies: The Silence of the Lambs, The Evil Dead, and Jurassic Park. Which one do you choose?

You may be tempted to choose The Silence of the Lambs because it’s a classic, or maybe you want to choose The Evil Dead for the adrenaline rush from the sudden, scary visuals i.e. “jumpscares”. The dinosaurs in Jurassic Park aren’t too scary, right? In the end, you decide to look up the movies on IMDB and see which movie has the best ratings. How can you be so sure you’ve chosen the right movie?

Choosing between classics, movies with a lot of jumpscares, and movies with dinosaurs is hard. Over the past eight weeks, I analyzed data in the hope of answering one question: What makes a good horror movie? Using attributes like movie ranking, movie duration, jumpscare count, jumpscare rating, and director, I analyzed the formula behind a high-rated horror movie. At the end of this article, I will give suggestions on which horror movie to choose given your preferred scare-level.

To conduct this analysis, I had to combine data from multiple sources. My primary data source was a list of over 600 horror movies with jumpscare counts and movie ratings. This dataset also included the movie’s director, release year, and availability on Netflix. In order to get accurate ratings for the movies, I used another dataset of over 5,000 movies. The supplementary dataset included the primary actor in the film and film duration. I used Microsoft Excel to match values and scrub the data. The cleaned data was manipulated in Tableau to create my analysis.

I began by learning about the different attributes associated with each movie. The average movie had a six out of ten rating, a 98-minute movie duration, eight jumpscares, and a two out of five jumpscare rating. Within the dataset, 44 of the 660 movies contained 0 jumpscares and the majority of movies were released before 2000.

Before I jumped into the jumpscare database, I was curious about the correlations between movie duration, release year, and rating. The movies in the dataset range from 26 minutes to three hours, with the majority of movies between 73 minutes and 124 minutes. The chart below shows that movies with a longer duration tended to have a higher average movie rating – The longer the movie, the higher it was rated.

Finally, I analyzed the relationships between movie duration, movie ranking, and jumpscare count. The majority of movies with high jumpscare counts again fall around the average movie ranking of six out of ten, with no noticeable upward trend in movie rankings. This led me to analyze the top-ranked movies in the database. All movies that received a ranking above 7.5 contained a jumpscare count from 0 - 15 jumpscares and were all above the 98 minute average duration time. Additionally, the top five movies all have jumpscare counts below four and rankings above 8.4.

A few things stood out about the data. Starting with the duration of horror movies, the data showed that: The longer the horror movie, the higher the ranking it had. This is most likely a byproduct of the dataset, not necessarily a true, direct relationship. Movies that were considered classics typically had a longer duration, as well as a low number of jumpscares. The dawn of jumpscares after 1990 carried with it lower average movie rankings. This could be because the surge in horror movies in the 21st century was being compared to high-ranked, previous classics before the 21st century. The new horror movies that were experimenting with large numbers of jumpscares could have had difficulty being compared to a horror movie classic ranked above 8.0 with zero jumpscares.

If you’re looking for a horror movie to watch or maybe a series to binge, I have a few recommendations. If you like watching movies that produce a psychological/universe-questioning feeling, I would stick to the classics. The classics are movies that, for the most part, were released before 2000 and don’t have the same adrenaline-pumping rush that a newer movie with jumpscares would have. Don’t be afraid of the long movie duration, because the majority of them run over an hour and a half!

Maybe you’re in the mood for an adrenaline rush or maybe you have some friends over to get scared with. In this case, I would stick to the movies with high jumpscare ratings. Although they typically have lower than average movie rankings, they are good for a temporary scare or even a laugh. These movies will most likely have less of a “too afraid to go to sleep” effect than the classics and are typically shorter. A few examples of these are listed below:

I also wanted to include my favorites, which vary across year, movie ranking, and jumpscare rating. My favorites range from classics to modern psychological thrillers. However, it appears I prefer movies with above-average movie rankings and above-average durations. If you don't know what horror movie to watch, choose between my three favorites, depending on what type of sleepless night you want to have. Or, look through the visualitions in this blog to see if anything stands out to you!