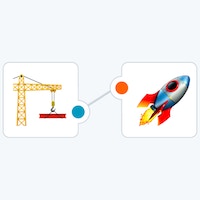 Use GitHub Actions to build every branch and to deploy the trunk when it builds successfully. We look at an example of a Node site deployed via FTP, with workflows that can be adapted to your needs.

Projects hosted on GitHub can implement continuous integration (CI), continuous deployment (CD), and continuous delivery (the other CD) with GitHub Actions workflows. This works in public and private repos. (There are tiered limits for storage and time.)

In this article we will look at the basic structure of GitHub Actions workflows, and then build out support to test all branches and then deploy production builds to a remote server via FTP. No GitHub Actions background is necessary, but a basic understanding YAML will be helpful.

(Why deploy via FTP? In my case, I needed to deploy a static generated Nuxt app to production. Using a service like Netlify or Vercel was not an option, and I had FTP access to the server but not SSH access (I hope you aren't in the same situation). But the FTP part of this is just a small detail; the final deploy workflow is flexible and can be adapted to your needs.)

* In GitHub Actions, using an artifact from one job in another requires uploading the artifact to GitHub as a file. The file is available for download after the workflow completes (by default for 90 days). That means that even though supporting manual continuous delivery at an arbitrary time is not a goal of the solution we'll build, we do get pretty close to it by continuously delivering the built artifact to the continuous deployment workflow; if continuous delivery separate from automated deployment is a goal of yours, this file will be useful: where I have "build" and "build and deploy" workflows and configure the file to live just long enough for automated deployment, use just a "build" workflow and configure it to live as long as your process requires.

Let's look at annotated barebones workflows. These are missing build and deploy steps, but they illustrate the structure. Working examples come next.

Now let's see it for real, building a Node app and deploying it via FTP. (If you aren't uploading via FTP, your deploy step(s) will be different.)

Make sure Actions are enabled in your GitHub repo: repo > Settings tab > Actions > "Allow all actions" or "Allow select actions". Adapt the workflows to your needs, then commit them in a non-trunk branch and push to GitHub. Go to your GitHub repo's Actions tab to see the build workflow running. Merge into your trunk branch, push, and go to the Actions tab to see the build-deploy workflow running.

Let us know if you use or adapt these workflows in a project! Viget is on Twitter at @viget.

Every GitHub Actions workflow has a status badge at <workflow file path>/badge.svg. To show the world that production is healthy, modify this snippet and add it to your README.md: