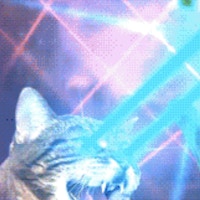 We Vigets love games. We’re known to host game nights at the office, discuss our favorite board games over beer, and even bring games to our holiday gift swaps.

So, when our annual Pointless Weekend rolled around (in which we design, build, and launch an app or site in 48 hours), the Durham team jumped at the opportunity to build our own game that we’d play for years to come.

One of the most popular games with our team is Celebrity (aka Lunchbox, Fishbowl, or Salad Bowl). We wanted to build a digital version of this DIY pen-and-paper game, and of course, we wanted to make it even more exciting.

So, without further ado… we are pleased to announce Gifbowl!

What makes Gifbowl so great? Let me tell you.

We wanted to take advantage of the benefits the mobile web offers, and wanted to keep the barrier to entry low. Nate and David built a mobile web app that can be accessed from any device — no app downloads required. The game works best on phones, of course, but can also be played directly from your tablet or computer.

The game back end is built in Elixir, with a React front end that allows for super fast game play and loading speeds, all without requiring new page loads or page refreshes.

Typically, Celebrity is played by having each player writing down various celebrities, words, or phrases and adding them to a physical bowl. But, Gifbowl is all digital. With a new medium comes new constraints and benefits, and we wanted to work within those.

Each Gifbowl game has a funmaster, or, the person who initiates the game and runs it from their phone. But, we wanted other players to still have access to the same game so they could create their own cards. To accomplish this, we built the concept of users so anyone can join a game that the funmaster has created and add cards. Then, we included a remote view to display which team is up and the current score, which allows players to follow along and make sure no one is cheating.

While the pen-and-paper game with written clues is pretty fun, we at Viget prefer to communicate through visual means; emojis, gifs, and dongers.  (V●ᴥ●V)

We leveraged the Giphy API to pull in relevant gifs for an added twist. Each card gets an associated gif when it’s created. Don’t like the first result? Just refresh to get a new one.

Sometimes these gifs get distracting during game play, but that’s just part of the beauty and fun of the game.

We all know that person who just can’t follow the rules. For those players specifically, we built an Oops! I cheated button. Accidentally blurt out the name of the card? Click that button to dock yourself a point and advance to the next round.

Looking for a game to play at your next get together? Or just wanna look at some fun gifs? Check out Gifbowl and let us know what you think in the comments. Happy playing!