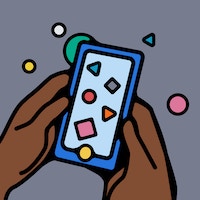 As a reflection for Black Heritage Month, we've listed tech resources that center or make space for Black Joy. From wellness apps to social media and bail out efforts, the following platforms are building freer futures for us all.

We’re experiencing an unprecedented moment and are more physically isolated than ever. Being intentional about holding space for one another collectively is necessary for us to not just survive, but also thrive.

To honor Black Heritage Month, we’ve chosen to explore the possibilities of centering, honoring, and cultivating Black Joy in the current tech landscape. From wellness club apps to social media platforms, Black-led tech is building the futures we all deserve.

For some historical context/background, the observance now known as Black History Month initially began as Negro History and Literature Week. The second week of February was chosen by historian Carter G. Woodson and the Association for the Study of Negro Life and History to coincide with the birthdays of Abraham Lincoln and Frederick Douglass. Woodson and the association expanded the focus to the collective achievements of Black communities whose struggles and triumphs contributed to the advancement of civilization. As Woodson would put it himself, “this is the week set aside by the Association for the Study of Negro Life and History for the purpose of emphasizing what has already been learned about the Negro during the year.” A celebration meant to serve as reflection based on year-long study eventually expanded into what we now know as Black History Month.

So, why are we writing about Black Joy in tech?

If the task, in the spirit of Woodson, is to reflect on the year’s learnings with respect to collective and historical African diasporic/Black existence; what can be made of 2020? As we reflect on the year and its obsidian inheritances, we should remember Woodson. As he stated, “We should emphasize not Negro history, but the Negro in history. What we need is not a history of selected races or nations, but the history of the world void of national bias, race hate, and religious prejudice.” By exploring the efforts of many to build such futures through tech, we can center the pleasures of possibility and honor the living heritages we are woven within.

Here’s a list of platforms weaving the technical tapestries of the future.

Ethel’s club is a social and wellness platform that centers people of color and take a zero tolerance policy against discrimination. It provides tools to encourage healing and communal care.

Black Tech for Black Lives is a collective that names tech as a complicit space and seeks to disrupt this influence through committed, justice-oriented action.

Based in Jackson, Mississippi, the Bean Path is a 501(c)(3) non-profit organization founded by Dr. Nashlie Sephus. Their mission is to sow technical expertise in order to grow networks and fertilize communities.

We Read Too is a resource for anyone seeking diverse literature for youth readers. It is a directory with “hundreds of picture, chapter, middle grade and young adult books written by authors of color featuring main characters of color.”

The Plug is a news platform that provides insights on the Black Innovation Community. It examines the trends and events shaping the innovation economy and provides accessible reports to subscribers.

Black Girls Code is a nationally recognized non-profit organization that provides technology education for African-American girls. They aim to “increase the number of women of color in the digital space by empowering girls of color ages 7 to 17 to become innovators in STEM fields, leaders in their communities, and builders of their own futures through exposure to computer science and technology.“

Black ComputeHer tackles the lack of inclusion in computer science and tech education through “access to opportunity, education & training, and executive thought leadership.”

Black Tech Matters is a social impact organization which focuses on increasing diversity in tech through multi-sector partnerships and targeted networking.

For further reference, here is a list Jasmine Stammes put together of African-American women leading in tech.