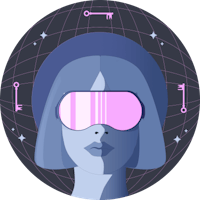 As we consider the mirrorworld, our full-size digital twin, I'm curious how (and by whom) content will be delivered to us.

A few months ago, Wired published an article that describes the "mirrorworld" - a 1:1 augmentation of our physical world with digital content. “Someday soon, every place and thing in the real world—every street, lamppost, building, and room—will have its full-size digital twin in the mirrorworld.” It’s easy and exciting to envision how this future will be technically possible with continued advances in mobile and XR technologies. But something that’s been bugging me about the mirrorworld is the uncertainty of how (and by who) content will be delivered to us. Will the owners of physical property have a role in this future reality or will a limited set of tech companies like Google, Apple, Amazon and Magic Leap gate keep what content is served up?

Looking back, I realize this problem isn’t new. It’s already an issue for location-based content on mobile devices. A few years ago, we worked with the Bronx Zoo to redesign their responsive website, which includes an in-park experience to help with wayfinding and delivering live information while people are visiting the zoo. One of the biggest challenges for launching a product like that is distribution. How does a business like the Bronx Zoo get a significant number of its visitors to both know about their in-park digital content and make the effort to access it? It’s not an easy problem to solve and the two current options aren’t great.

For many digital product companies (ex. game developers, social platforms), building native apps and distributing through app stores is a great option. But for most brick-and-mortar businesses, cultural institutions, and other facilities that want to serve up just-in-time digital interactions at their physical locations, a native mobile app is a terrible distribution model. Unless you're Starbucks or Disney World, the chances of a significant number of your customers downloading a dedicated mobile app for your in-store or on-site experience are not great.

Scott Jenson described this problem way back in 2011 and it’s still true today. “The problem with apps, and by this I mean native apps that must be downloaded to your phone, is that they are just becoming too much trouble to organize and maintain. It’s just not realistic to have an app for every store you go to, every product you own and every website you visit.”

In theory, the web is a much better option for just-in-time interactions. Users can go to a URL, interact with and experience content, then leave without having to constantly download, install, update, and uninstall apps. The problem is in the marketing and distribution of mobile web apps. The traditional method is to print signs with vanity URLs. But this requires customers to notice the signs in the first place and put in the effort to manually type in the URL. This adds just enough friction to the process to make it less than ideal.

The other method is to use an intermediary technology like QR codes or NFC that “automatically” drive users to URLs. The fundamental flaw of these technologies for content distribution across a large physical area is that they require users to be in close proximity to the code or chip in order to work. This simply isn’t practical for places like airports, museums, college campuses, etc.

What the mirrorworld needs

URLs are addresses for content on the web that can be reliably accessed no matter where the user is physically located. A highly simplified explanation of how they work is that when someone enters a domain (the first part of a URL, like www.viget.com) into their browser, that domain is looked up in a public registry which points to a server that will respond to that person’s browser with content.

We need the geolocation equivalent of this. Instead of a person typing in a URL to be routed to content, web browsers (on phones and XR goggles) should be able to capture the user’s current location and pass that to a public registry which responds with a URL that matches where they are. For example, let’s say you enter the perimeter of a zoo, your browser should be capable of pulling up a URL that the zoo specified for their in-park content. If you're thinking, "but that's exactly what geofencing is", then you're exactly right! The future should have a public registry that geofences the world.

How would this work?

This blog post isn’t going to be where all those details are worked out. No one person could do that - certainly not me. But I do have a few ideas:

1) The system should be built on top of the existing Domain Name System (DNS). There's no need to repeat the part that resolves URLs to IP addresses/servers. This system could precede that one and point geolocation coordinates to URLs.

2) The system should be resolved within the legal framework of property law. Tech companies should be free to create their own distributions of the mirrorworld that serve up digital content anywhere they’d like. For example, Burger King making an app that serves up coupons when you’re near a McDonald's. A public registry of geolocated content shouldn’t have these conflicts. I believe it’s in the best interest of both property owners and consumers to have the option of reliably matching content from the digital world to the actual owner of that location in the physical world.

3) The system should be for property-scale interactions, not device-scale. The internet of things movement is slowly creating a world full of smart devices that need to communicate with one another and with people. This space requires a whole other set of standards and communications protocols. This system could work in tandem with, not replace those. For example, imagine a person walking into a museum and automatically finding the museums mobile web app based on their geolocation. Within the confines of that web app, they can then have permission to interact with physical devices within the museum.

I fear we're marching toward a future in which XR and mobile content will be so compelling and useful that without thinking about it, our society will find itself with a fragmented series of mirrorworlds - each a walled garden that heavily favors the owners of digital platforms and leaves behind the people and businesses who own physical property. I hope that some smart and principled people will guide the development of the mirrorworld(s) in the same spirit that today’s open web was developed.