The DC Metro: Thoughts on Design, Behavior, and Escalator Etiquette

I would hardly count my commute on the DC Metro as my favorite part of my day. Metro is notorious for having service problems and delays, sometimes major — often making commuting a trying experience.

While infrastructure is certainly to blame for the Metro’s larger issues, other problems, such as inefficiencies in how Metro riders move through the system, are caused by design. It’s common to see people blocking doorways, walkways, and escalators — not out of rudeness, but out of a lack of feedback from their environment on how to behave.

This is great news for someone like me, though, because I’m a user experience designer and know a thing or two about solving experiential problems like these. Below, I’ve outlined some proposed solutions ranging from practical and inexpensive to conceptual and pricey.

The Metro Platform: Helping People Know Where to Stand

Where people stand on the Metro platform can have a big impact on commutes. In order to keep trains moving quickly, especially at rush hour, people need to spread out evenly along the platform and line up to the sides of opening train doors to avoid blocking exiting passengers. Otherwise, trains get stuck in stations for too long and back up the rest of the system.

In other countries, platform screen doors are common and make it clear where doors will position. However, this would be an extremely expensive endeavor in the US.

The simplest, most cost-effective solution used in some systems around the world would be to paint the areas of the platform where doors are expected to land. Additionally, arrow decals could emphasize where people should stand to avoid blocking doors. 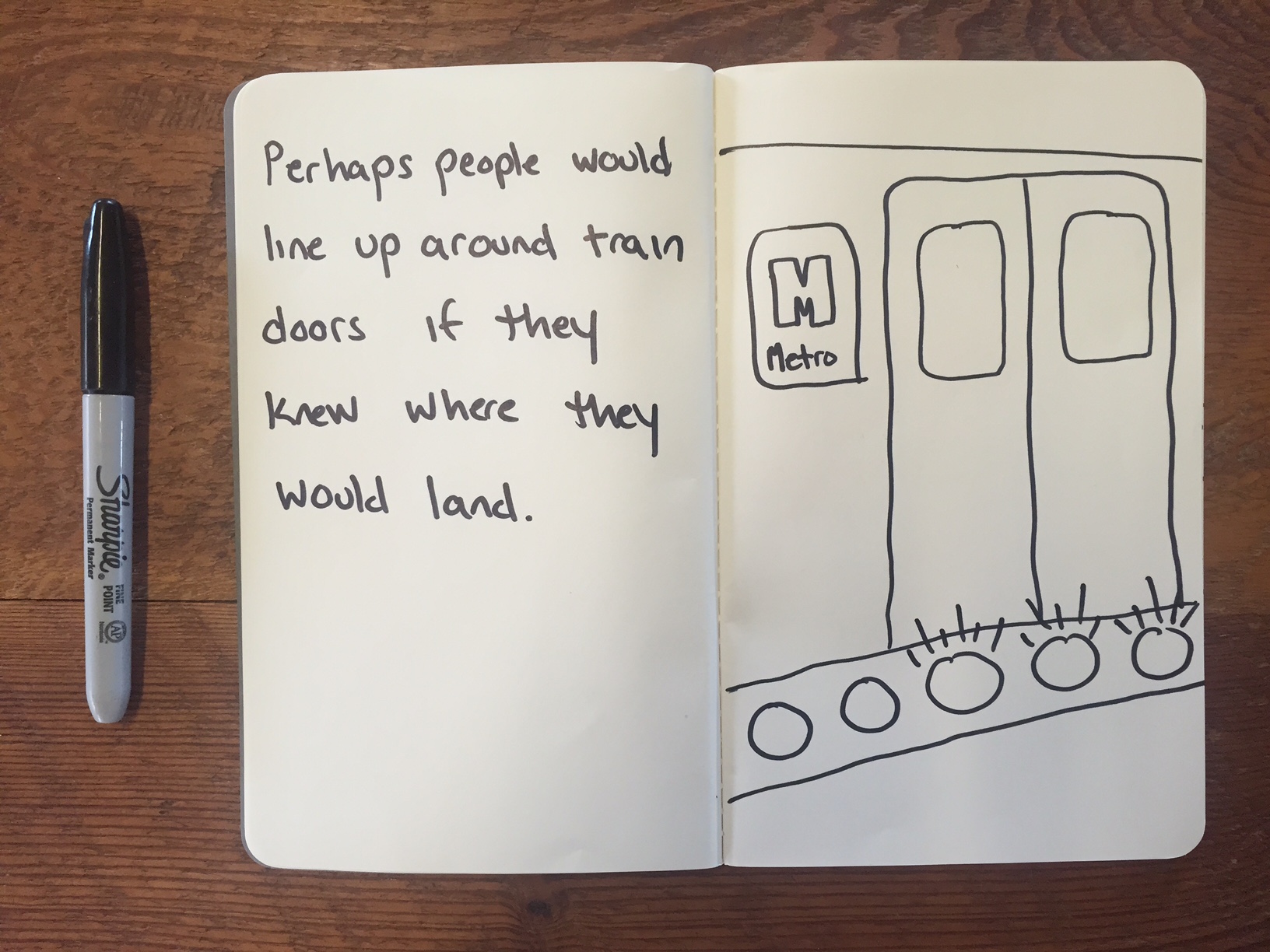 I also think we could use the red safety lights that line the platform to communicate the same point. Lights positioned in front of where doors are expected could shine steadily (instead of flashing as a train comes in).

If we wanted to get fancy (and futuristic), these lights could even signal which cars were more or less crowded, glowing green for cars where you might find a seat and red for cars in which you probably won’t. This would further incentivize people to spread out on station platforms during the morning and evening rushes.

The Train Car: Preventing People from Crowding Around Doors

One of my biggest pet peeves is passengers who crowd the train doorways when other people are trying to exit. The proper etiquette is to step off the train and then back on if you’re near the doorways. Instead, people stand in place, forcing others to push through.

Ultimately, I think this is an etiquette problem. Poster campaigns are common for teaching train etiquette; but, how can we use the environment to give people feedback on how to behave?

Metro is already making progress here — the new 7000 series trains slowly being introduced into the system have an automated announcement which tells passengers to let others exit the train. This is great. To supplement that, I think the simplest and most obvious solution is to have a sign on the doors that says “Please don’t block the doors” (current signage: “Please don’t lean against the doors”). 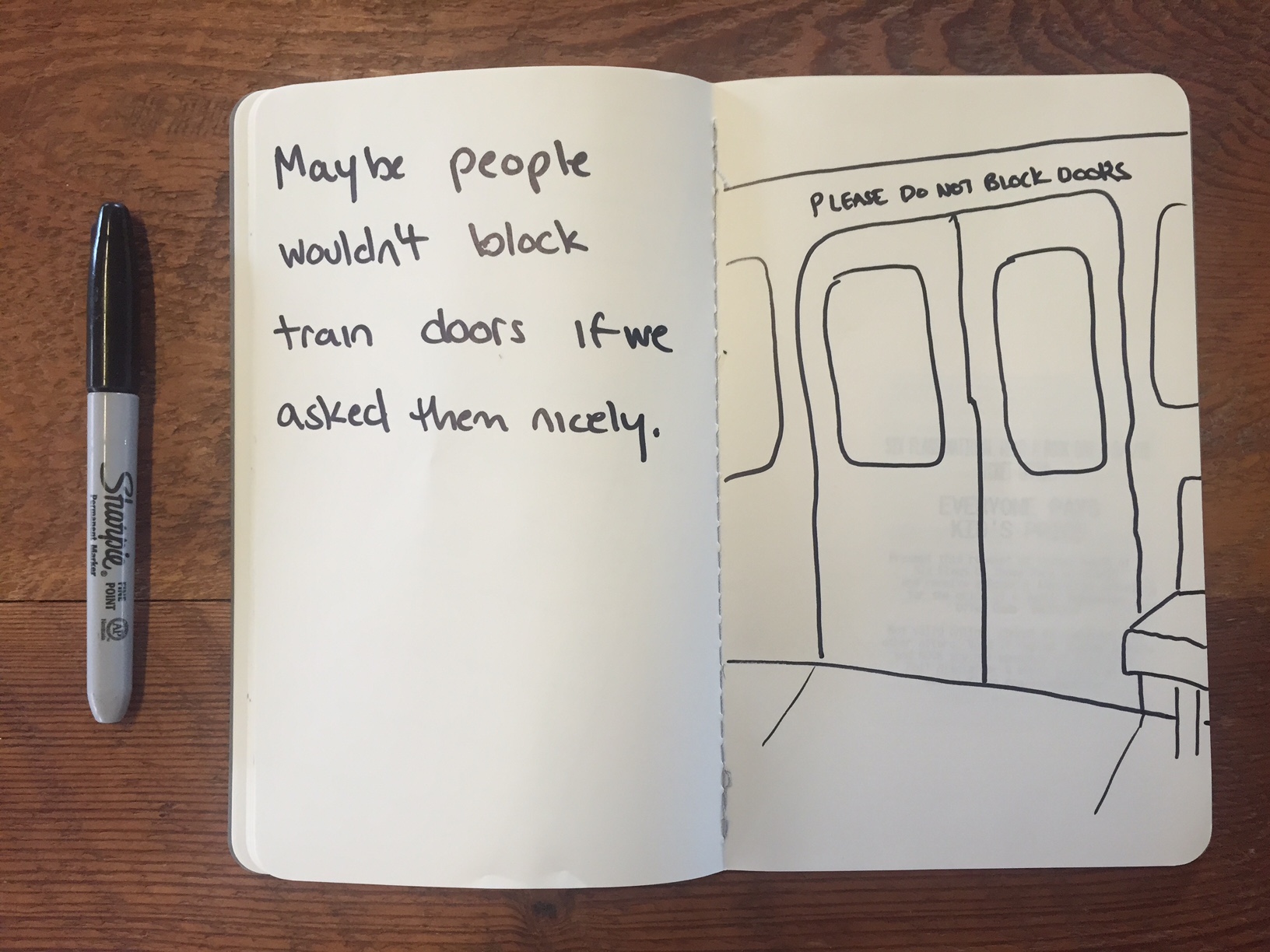 Additionally, I think trains could add additional cues — perhaps arrows on the areas of the floor/ceiling immediately near the doors — to prime people to move. I could even imagine a future where weight or motion sensors were installed near train doors to ask people to move if they were blocking people’s paths.

The Escalator: Getting People to Walk on the Left

This, perhaps, is the collective bane of the average Metro rider’s existence: people who don’t observe escalator etiquette by standing on the left side (the passing side). I’ve missed one too many trains to let this problem slide.

Like blocking Metro doors, the problem here is etiquette. Some people, especially tourists, simply don’t know the rules of the escalator, so we need to teach them.

When Googling escalator etiquette, I came across a great idea — painting moving foot steps on the left side of the escalator. I love it; but, I worry that the message would get lost if the escalator is too crowded.

If we want to leverage the technology the Metro already has, we could use the lights that run along the sides of the escalator. Perhaps they could appear to be moving up/down on the left side of the escalator, priming people to keep moving.

Additionally, I’d leverage something visible to the escalator rider the whole time — the moving railing. This could be as low tech as having the words “Please keep walking” written repeatedly on the left railing, or as fancy and high tech as turning the left hand railing into a touch screen game — one you have to keep moving to play and win. 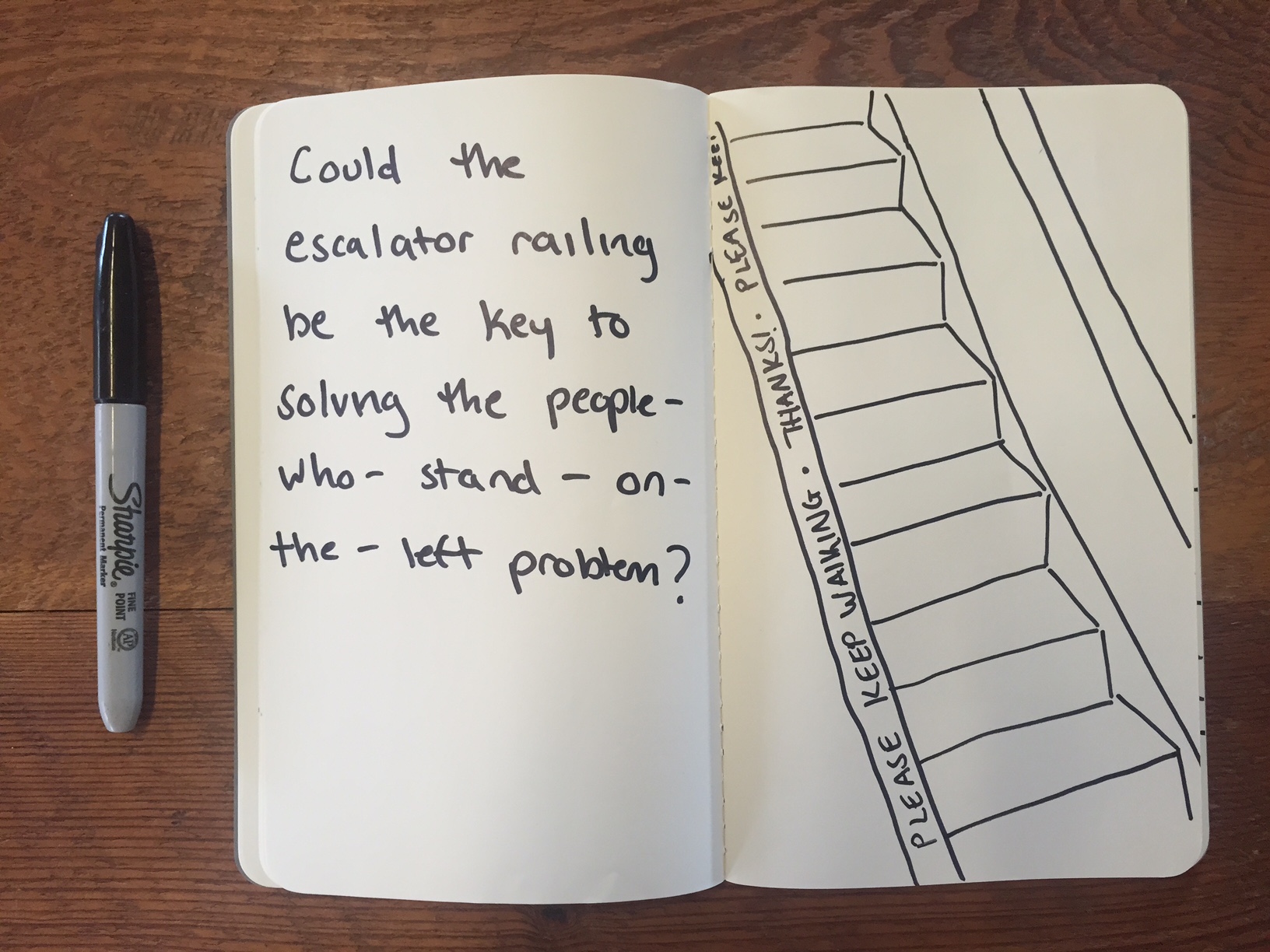 In a perfect world, Metro would always run on time, there would never be unexpected service changes or delays, and trains would run much more frequently on the weekends. But, since we’re not likely to find ourselves on this fantasy Metro anytime soon, I’d settle for some station updates in the meantime. Design changes don’t need to be big to have a big impact. Even a few small design cues could go a long way in making commutes run smoothly, creating a better user experience for all riders.