Snapchat is the Donald Trump of UI Design 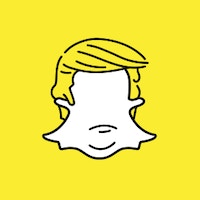 What can designers learn about the success of Snapchat’s unconventional design from the rise of Donald Trump?

A few days ago, I enjoyed reading Carmel DeAmicis’ article on Medium, Did Snapchat succeed because of its controversial UI? If you haven’t read that article yet, you should stop now and give it a read, but the general argument is this: Snapchat breaks all the rules of conventional usability, yet it has been widely adopted in part because of this rather than in spite of it.

I was intrigued by the article's points about why this might be, but I want to add another perspective. As I read the article, there was a particular analogy that I couldn’t get out of my head: Snapchat is the Donald Trump of UI design.

Let me explain. Every once in a while, a truly disruptive event comes along that challenges things we thought we knew about the world. Within a few hours on Election Night 2016, the world realized in unison that rules of electoral politics that we thought mattered – polls, campaign infrastructure, party orthodoxy – actually didn't.

What Trump has done to our received wisdom about electability, Snapchat has done to designers’ convictions about the importance of usability in design. UX designers in particular regard intuitive design and usability testing as core threads of our intellectual lineage and professional identity. And yet here is Snapchat, a $28-billion marvel of unintuitive design.

It can be deeply troubling to see our pillars of conventional wisdom demolished. We wonder, how could we have been so wrong? What else have we missed? We also tend to overreact. If we could be so wrong about this, does anything really matter?

So what can the rise of Donald Trump teach designers about the perplexing success of Snapchat’s unconventional UI? Here are a few thoughts.

As DeAmicis notes, it’s not clear whether Snapchat’s UI design is the product of visionary foresight or just an accident that worked. Josh Elman’s concept of “shareable design” as a successor to “intuitive design” is a compelling idea, but I'm doubtful that it was an operating philosophy in the early days of Snapchat (but I could be wrong!).

To their credit, Donald Trump's campaign developed a strategy that was ultimately successful, but the early months of the campaign were by all indications a sustained improvisation. Trump never expected to stay in the presidential race past October 2015, much less make it all the way to the White House. He listened to what made his crowds cheer, and then he said more of that stuff.

Both hit on a powerful idea at just the right time, but that doesn’t mean that anyone else will be able to replicate their successes by following the same playbook.

In both of these cases, ascribing some kind of genius vision to Snapchat and Trump ignores the role that happenstance played in both cases. Both hit on a powerful idea at just the right time, but that doesn’t mean that anyone else will be able to replicate their successes by following the same playbook. (After all, lots more bullies and weirdos lose elections than win them.) On the bright side, you don’t need to be a genius with a fancy concept to introduce your strange new idea into the world. Just put it in front of people, listen, and iterate.

Value is bigger than presentation

An intuitive digital interface is only one part of what makes a product valuable. A slick UI isn’t even necessary to make a product great: just look at Craigslist. By making its photos self-destruct after sending, Snapchat encouraged a new type of user behavior and then benefitted from the network effects of a growing user base. Then it released its amazing filters, and its value multiplied further.

During the election, Trump’s value was his message, which was basically “F**k you, Establishment.” This message was catnip to a plurality of the Republican base. Trump said things no other politician would say: build a wall, ban Muslims, lock her up, etc. Unburdened by the usual political constraints of feasibility and tact, Trump said exactly what his base was already thinking. After all, he watches the same TV shows.

Snapchat’s features and network and Donald Trump’s message are so valuable to their audience that matters of presentation are basically irrelevant by comparison.

The point is that Snapchat’s features and network and Donald Trump’s message are so valuable to their audience that matters of presentation are basically irrelevant by comparison. While it might be true that a certain amount of esotericism may be appealing to its youthful audience, Snapchat’s filters would be a killer feature no matter how easy or difficult they are to find in the app. As important as design can be to the success or failure of a product, Snapchat’s value comes from its function, not from its design.

Similarly, the power of Trump’s message allowed his supporters to overlook massively dissonant aspects of his persona. It’s why evangelical Christians supported a guy who bragged about sexual assault, and why Rust Belt workers voted for a billionaire playboy. In the general election, not being Hillary Clinton proved valuable enough to mainstream Republicans that they could overlook their grave doubts about his fitness to serve. When people find something valuable, they’ll do anything to get it.

Being weird and unconventional is a good way to build a niche, but widespread adoption requires a more inclusive approach. What both Snapchat and Trump have been really, really good at is speaking the language of their target audiences. But now that Snap is a public company and Trump is commander in chief and leader of the GOP, their constituencies have changed, which means new tactics are needed.

For social, tech-savvy millennials, spending time fumbling through an app may be no big deal. For those users, the Snapchat UI’s hostility to older users is a feature, but the market will most likely judge that to be a bug. I would be surprised if we don’t see usability improvements start popping up in Snapchat almost immediately. Who knows, there may even be a menu bar by the end of the year.

Now that Snap is a public company and Trump is commander in chief and leader of the GOP, their constituencies have changed, which means new tactics are needed.

If you think that these types of changes would detract from what makes Snapchat special, you're going to be in for a lot more disappointment as it makes the inevitable Facebook-like shift to mainstream adoption. Hiding a few easter eggs in the UI is one thing, but no product seeking a large user base would dare to release something as unusable as Snapchat in its current form. Expect post-IPO Snapchat to be thoroughly focus grouped and user tested.

Similarly, the game has changed for Trump. As a presidential candidate, being loud and accusatory is a great way to stir up GOP support, but as a president, it’s a great way to get yourself investigated and spend your term mired in scandal. Time will tell whether Trump’s administration learns to play by the rules of Washington’s entrenched power dynamics or tries to steamroll the whole thing. Whether either course will be to the benefit of the American people or the world is another story, but learning to moderate his impulses would certainly allow Trump to get more accomplished.

This is happening, whether you like it or not

No matter how much you may dislike Snapchat’s janky UI or our unprecedented new president, you can’t put the genie back in the bottle. Ignoring or discounting the remarkable successes of these two American phenomena is not an option.

Before being too snobby about Snapchat’s design choices, we should remember that design conventions don’t emerge from thin air. The hidden gesture control of today may become the recognizable interaction pattern of tomorrow. For better or worse, expect to see more products mimicking Snapchat’s UI, and the gradual convergence on new design conventions that will result.

For better or worse, expect to see more products mimicking Snapchat’s UI, and the gradual convergence on new design conventions that will result.

In the same way, Trump has changed our cultural and civic playing field irrevocably. We will never be the same country we were before Trump. And as much as many of us may struggle to remind ourselves that this is not normal, norms change.

As citizens, we can play a part in shaping those norms through vigilance, education, and activism. As designers, we can do our part by designing products that are intuitive and accessible to everyone. Sure, there is more to design than usability, and bold new ideas help move our practice forward. But no matter how trends change, usability isn’t going out of style any time soon.