Often I need to send a file containing sensitive information, like a database dump or a digital certificate, to a client or fellow developer. It’s difficult to know the correct level of paranoia to exhibit in situations like these. Obviously, nobody’s sitting in front of a computer in a dark room, just waiting for me to leak the SSL certificate for the staging Solr EC2 box. At the same time, I know there are many people with access to my email, my Dropbox, my Basecamp posts, and it would be irresponsible of me to rely on their collective good faith to keep this information secure.

I’ve settled on a simple solution that doesn’t inconvenience the sender or receiver too terribly much (assuming they’re both on modern, Unix-compatible machines) while making things considerably more difficult for any would-be eavesdroppers. Suppose I want to send an AWS PEM certificate to Chris, disregarding the fact that he’s sitting maybe four feet from me right now. Here’s what I’d do:

I have a short shell script, encrypt.sh, that lives in my ~/.bin directory:

This script takes two arguments: the file you want to encrypt and a password (or, preferably, a passphrase). To encrypt the certificate, I’d run:

The script creates an encrypted file, production.pem.enc, and outputs instructions for decrypting it, but with the password blanked out.

From here, I’d move the encrypted file to my Dropbox public folder and send Chris the generated link, as well as the output of encrypt.sh, over IM:

Once he acknowledges that he’s received the file, I immediately delete it.

Now I need to send Chris the password. Here’s what I don’t do: send it to him over the same channel that I used to send the file itself. Instead, I pull out my phone and send it to him as a text message: 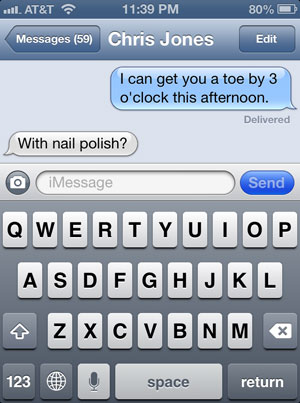 Now Chris has the file, instructions to decrypt it, and the passphrase, so he’s good to go. An attacker, meanwhile, would need access to both his Google chat and iOS messages, or at least a sweet $5 wrench. (Friday is two-for-one XKCD day, in case you missed the sign out front.)

So that’s what I’ve been doing when I have to send private files across the network. I’m sure a security expert could find a hundred ways that it’s insufficient, but I hope said strawman expert would agree that this is a much better approach than sending this information in the clear. I’m curious what others do in these types of situations – let me know in the comments below.