Nothing makes me happier as a programmer than automating monotonous and incredibly time-consuming tasks with a quick script.

Increasingly these scripts tend to involve interacting with external (read: unreliable) systems. Oftentimes this unreliability can suck the fun right out of scripting. Run a script. Watch it fail halfway through. Go clean up after the partial execution. Run script again. Watch it fail at 99%...

So how can we make potentially unreliable automation scripts fun again? Idempotency.

If I run an idempotent script, and it fails completely halfway through, I just run it again to achieve the exact same state as if the script has executed perfectly all the way through the first time. Beauteous.

Idempotency in scripts of this nature requires durable persistence of execution state. One could of course use a database to achieve this persistence, but connecting and writing to an external database is a bit heavy-handed for simple scripts. It adds additional dependencies, and makes the script more complex and less portable.

In these cases, PStore is a perfect, lightweight database alternative. PStore is a class included in the Ruby Standard Library (since v1.8.7) that implements file-based persistence, and better yet, it feels just like a Hash.

To get started with PStore, first instantiate a PStore object.

This creates the file to which store contents will be written. 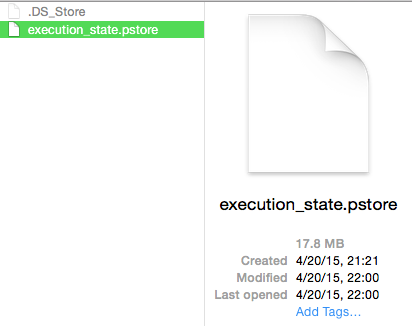 To read and write from your PStore, you must open a transaction. PStore operations are transactional to prevent the store from ever representing a transitory state. Opening a transaction uses an intuitive block syntax:

At the end of the transaction block, all changes to the PStore are committed to disk. The #commit and #abort methods allow you to programmatically exit the transaction before reaching the end, saving or discarding any changes respectively.

Within a transaction, you can interact with a PStore just as if it were a Hash with #fetch, #delete, #[], and #[]=. PStore dumps objects saved to the store using Marshal, meaning they are stored to the .pstore file as binary. (If you'd like more human-readable persistence file, check out YAML::Store which provides the same utility as PStore, but dumps objects using YAML instead of Marshal.)

So using PStore is easy, but how might we use it to achieve idempotency?

Our work on projects at Viget often concludes with large data migrations off of existing systems into the new systems we've just finished constructing. Recently this took the form of a massive and complex data migration out of a Drupal installation and into a new CMS via API requests.

The migration involved several layers of computationally-expensive data transformations, and two separate API requests into the new system for each data entry (one to insert the entry, and a second to build its relationships to other entries). Over a massive dataset, even with a high degree of parallelism, the migration script took nearly an hour to fully execute.

Reperforming the entire migration in the event of a failure wasn't an attractive proposition, but more importantly, we needed the ability to use the same script to quickly migrate new records after the initial import had been performed.

In this case, we use PStore to persist 1) objects resulting from expensive processes, and 2) an ID dictionary that maps between old and new CMS entry IDs. The process is actually very straightforward; before you do anything, check to see if you've done it before.

The steps for this particular migration were as follows:

The code example below illustrates the performance of these steps.

There you have it. PStore is fantastic tool for durably persisting data for quick, idempotent Ruby scripts. So next time you find yourself frustratedly running, resetting, and rerunning your scripts, reach for PStore.