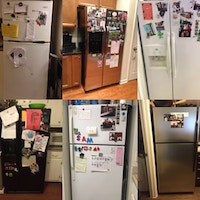 A human vision for the future of the fridge.

Is the refrigerator of the future just a door with a screen?

Next time you walk through a kitchen, look at the fridge. Chances are there’s something posted on it: maybe a photo, a kids’ drawing, a map, or a magnet from a plumber. Chances are there are many things posted on it. And if that’s the case, chances are these things both represent and help the people who use the kitchen in some meaningful, unique way.

Many refrigeration innovations are well-considered, improving energy efficiency, the use of storage space, and food preservation. But many refrigerator innovations show a lack of sensitivity to refrigerators’ extra-culinary meaning and usage–the alternative use that people have found for their refrigerators since the 1950s.

Contemporary refrigerator design for the most part disregards our habit of posting things, both in practice and in theory. In practice, by using non-magnetic surfaces that require people to find alternative ways to post physical objects (a search for “non-magnetic refrigerator” gives a sense of people’s desire and inventiveness). And in theory, by coming up with connected device concepts that mostly amount to embedding oversized tablets in the door.

Recognizing the disparity between reality and design, we decided to explore the user experience of the refrigerator to tease out interaction principles that could guide an evolution of the fridge based on people’s inventiveness rather than technology trends:

To see how people use the surface of their refrigerators–and whether they do so in any consistent way–we conducted a small survey and requested pictures of people’s refrigerators. The results revealed a few things:

Looking at the pictures people sent, we saw that surfaces ranged from tidy to haphazard, a surface diversity afforded by the infinite flexibility of physical things.

Curious how to improve the user experience of the refrigerator in a way consistent with people’s behavior, we held a design studio to explore design concepts for the refrigerator that would commingle digital information with physical objects. We wanted to take advantage of the affordances of each type of media–the automation and efficiency of digital objects, and the unique, personal, ambient nature of physical objects. Three constraints framed our exploration:

Participants’ unique living situations brought diverse perspective to the exploration: some live alone, some with families, some with roommates. We sketched and discussed broad interaction patterns as well as implementation possibilities.

Commenting on the history of domestic design, and its increasing technologization, Jofish Kaye argues,

The problem isn't technological innovation per se, it's technological innovation done without regard for the nuances of context. Take the Family Hub refrigerator, for example, presented at the 2016 Consumer Electronics show. Passing reference is made during the concept's introduction to refrigerators' traditional role as a "showcase" for the family. The concept seeks to improve this by integrating calendar, messaging, audio and video functionality into the fridge, essentially replicating smartphone technology, with some culinary twists. This vision–and the many like it–implies a future where all fridge surfaces look the same regardless of the home. Stainless steel and screens. The lists and photos will vary, but the form and function, and therefore experience, will be identical–completely at odds with the variety of refrigerator façades out in the wild. The attempt to digitize ends up prescribing, and therefore limiting, the product’s meaning and experience.

As a digital product designer, I appreciate systematic, interactive digital interfaces as much as the next guy. But what if before we put screens on things, we asked if a screen is the right thing? What if we considered the spectrum of interaction options? Or invented new ones? What if digital efficiency isn’t as meaningful as, say, affection? Or standardization isn’t as important as complete customization? Appropriateness of design ought to be our principle, especially when designing for our most personal space, the home.

“Jain is optimistic that designers will come around to reality eventually. ‘It's time to acknowledge that we are all whimsical, weird people,’ she says. ‘I think there are ways to design stuff that's more interpretive, more open to possibilities than just, ‘This is going change your life.’”

The best products, digital and otherwise, balance prescriptiveness and openness, and are iterated according to their usage–however unintended that usage may be. Their role isn’t merely to change people’s lives; it’s to preserve what already exists. Industry assumptions have to be continually questioned in order to make things that preserve the spirit of what people find valuable. Is the refrigerator of the future just a door with a screen? Or is it something more inventive and humanized? Any product can change someone’s life, but we have to think about the nature of that change.