How Much Code Coverage is Enough? 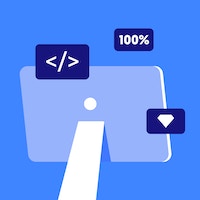 Measuring code coverage allows you to see exactly what percentage of your codebase you're testing. What should we be aiming for: 90%, 100%, or something else entirely?

We value automated testing at Viget, but we don't have a specific rule on code coverage from client to client. Between personal projects and Viget clients, my testing habits vary widely from scrappy MVP code with minimal tests, to robust end-to-end test suites with 100% coverage. The latter got me thinking: how much does 100% coverage really tell us? I'd argue that, like most things in life, what we should really be striving for here is quality and not quantity. I should note that I'm writing particularly about using Rails, RSpec, and SimpleCov here.

100% coverage does not mean your code is flawless. Firstly, it's easy for that 100% number to become meaningless quickly. You could theoretically put #:no-cov#s all over the place and claim 100% coverage without having even 50% coverage (don't do this!!).

On the other hand, you can "cover" a line of code without testing anything meaningful at all. Consider a method

You could write a unit test showing that the display_text method matches a string. That method would be 100% covered. A more meaningful test would be to write an integration test that this display_text shows up on the order confirmation page. 100% covered doesn't necessarily mean a codebase is error-proof.

Use a tool like SimpleCov and set a coverage goal, somewhere between 90-100%. You'll want to consider the level of QA engagement, development time available to get a feature out, and how risk averse you are. Mostly, don't get too caught up in that specific number. High coverage != well tested. If you're focused on the number, you could end up with perfunctory tests that don't provide much value. Instead, focus on writing a solid mix of unit tests and integration tests that account for happy and sad paths, and the coverage will come.