A Gzip Primer for Front-End Development 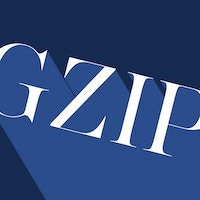 Find out how gzip works and how to improve page performance with it. It's simpler than you think!

It’s easy to treat Gzip as black box technology — for most people, it’s a checkbox that you turn on at the server level and forget about. But with a basic understanding of gzip, you can speed up your workflow and eliminate some performance myths.

How does it work?

Gzip is a lossless compression algorithm for files that is, in itself, a variation of another compression algorithm called LZ77. “Lossless” means that unlike the compression on videos, JPGs, and PNGs, Gzip doesn’t remove any data and can be reversed at the end by the browser to produce a perfect copy. Gzip works by finding and reducing repetition.

A neat example of gzip in action is Julia Evans’ 54sec video “gzip + poetry = awesome.”, which shows a simplified gzip identifying repetitive strings and replacing them with pointers.

To get a better feel for how LZ77 works on web content, play around with this JSfiddle a bit.

The savings on the example text are only around 10%, but on larger files (and files with more code) the savings grow. The JSON content of Wikipedia’s gzip article, for example, saves about 35%.

A quick thing to try is just typing “example example example” into the box. With some copying and pasting, you can reach a point where the savings top out at about 96%. This demonstrates how effective gzip is at reducing repetition — the more you use an identical string beyond a certain length, the cheaper it is.

What can be gzipped?

Nearly anything you send to a browser — HTML, CSS, JS, SVGs — can and should be gzipped. There are a few interesting exceptions, though:

What does this mean for how I develop?

Essentially, that repetition is your friend when it occurs inside a single file. Some examples:

There is a bit of extra complexity around the 32kb "sliding window" of compression, which is the distance that gzip can travel back while compressing to create pointers. This could come up if, for example, you use the same SVG icon in the header and footer of a very long page — in this instance, gzip wouldn't point one to the other due to the distance between them.

You should always still minify code even if you’re gzipping it. Minified CSS removes spaces and indentation, and minified JS goes even further by removing unnecessary code and renaming variables into a repetitive scheme. Gzipped, minified JS tends to be much smaller than Gzipped JS alone.

Note that I said single file at the start of this section — including the same Sass mixin in two separate CSS files will, of course, produce no savings. Same with getting back similar content on multiple JSON requests, or putting the same SVG in your JS and your markup. This can be an argument for inlining more assets into HTML than you might at the moment, as additional repetitive strings can cost less and less bytes.

How do I learn more?

Enabling gzip is different on every platform, so check out this handy guide from Patrick Sexton for enabling it on Nginx, Apache, and other platforms.

If you want to mess around with gzip locally, take a look at the command line usage of the gzip-size npm library. This will allow you to easily check gzip sizes when in local development, without running output through a server, just by running gzip-size filename.js.