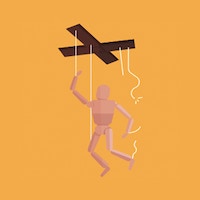 Ever wondered how to author your own controlled or uncontrolled components?

If you're new to React application development, you might be asking yourself, "What are controlled and uncontrolled components, anyway?" I suggest taking a look at the docs linked above for a little extra context.

The need for controlled and uncontrolled components in React apps arises from the behavior of certain DOM elements such as <input>, <textarea>, and <select> that by default maintain state (user input) within the DOM layer. Controlled components instead keep that state inside of React either in the component rendering the input, a parent component somewhere in the tree, or a flux store.

However this pattern can be extended to cover certain use cases that are unrelated to DOM state. For example, in a recent application I needed to create a nest-able Collapsible component that supported two modes of operation: in some cases it needed to be controlled externally (expanded through user interaction with other areas of the app) and in other cases it could simply manage it's own state.

Fortunately it's trivial to author a component with this behavior. The key is to create a component interface that accepts one of two possible configurations of properties.

For the Collapsible implementation, I was only dealing with a boolean property so I chose to use collapsed/defaultCollapsed and toggleCollapsed() for my component interface.

There is a dead-simple pattern within the component implementation that makes this work. The general idea is:

With destructuring and default values, this becomes satisfyingly elegant:

The above says, "give me a binding called collapsed whose value is this.props.collapsed but, if that value is undefined, use this.state.collapsed instead".

I hope you can see how simple and potentially useful it is to support both controlled and uncontrolled behaviors in your own components. I hope you have a clear understanding of why you might need to build components in this way and hopefully also how. Below I've included a the full source of Collapsible in case you're curious - it's pretty short.

We do a lot of work with React so we created Microcosm: a batteries-included flux. Read more from Nate and David...