Call Me By Your Name (But Maybe Check GoDaddy First) 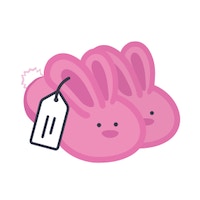 What to expect when you're expected to come up with the perfect name for someone else's idea.

I should start by saying that I love naming things. When I was a kid, I once named my fuzzy slippers. I’m now the person who names their car. Is it weird to get so much joy out of naming one's stuff? Yes. But naming things gives them a story. It makes them real. And that's pretty fun.

Given my long and illustrious history with naming, you’d think I’d be thrilled that part of my job includes helping people come up with the perfect name for their product, feature, or (occasionally) their entire company.

Don't get me wrong — it's not that I'm not thrilled. It's just that there's a big difference between naming your stuff, and naming someone else’s stuff.

For one thing, when you name your fuzzy slippers, you probably won’t have to worry about trademarking it, or finding a domain name. What you say goes. When naming a product, you may think you’re in control, but you’re not. GoDaddy and the United States Patent & Trademark Office are in control. They’re the gods of naming  — and a fickle, bloodthirsty pair of gods they are. Prepare to watch your best and brightest ideas be devoured like burnt offerings.

Thankfully, there is a workaround. Ever wonder why there are an increasing number of names that are nonsense words? It’s not just because eBay and Etsy set a trend. Made up words are simply a lot easier to trademark and turn into domain names.

For instance, back in April of 2018, we began working with a client to brand, design, and build a leadership coaching platform. When we got to the naming phase, our team fell in love with the word “Headway.” It was perfect. We loved the double meaning. We loved the way it sounded. We loved the way it looked as a wordmark. But when we consulted a trademark attorney, he told us that there was absolutely no way we could get it registered. We left Headway on a pyre and moved on.

We went back to the drawing board and started thinking about the words we had heard and used when we were creating the brand strategy. Words like “optimism,” “optimize,” and “optics” appeared frequently, but obviously none would work by themselves. We decided to keep the “opt” and have fun with the ending. We pulled up a list of suffixes and started mixing and matching. In the end, “Optify” emerged. It was short, punchy, felt optimistic but not perky, and looked great as a wordmark. It aligned with our brand, and most importantly, we hoped it would intrigue our audience. A name doesn't have to capture the essence of your brand in one word, but it does need to give people a teaser — something to make them want to know more.

Okay, so what happens when you and your team have finally landed on the perfect name? Time for the grand unveiling, right? Time to show the client, and start showering each other with confetti, right?

Remember: this isn’t your car. It’s not your anything. It’s someone else's brainchild. They’ve invested a great deal of emotional and mental effort, not to mention money, in it. You can’t just waltz in and tell them what they’re going to call it. No matter how perfect the name is, telling them in a climactic meeting will almost certainly not work. They’ll just nod, smile, say it’s a good start, and promptly begin brainstorming.

Clients need to be part of the naming process. What’s more, they deserve to be part of the naming process.They should get the chance to scribble words on stickies and put them on the whiteboard. You might think it’ll slow things down, but in reality it will make everything more efficient. You’ll be able to use their insights and the way they talk about their product. You’ll be able to get feedback in real time — to discard names immediately, instead of waiting to pitch it in a meeting and then discarding it.

We worked with a new leadership development startup to name, brand, and build their concept from scratch.

And most importantly, the clients will feel a sense of ownership over the name. They won’t have to approve it, because they helped create it. You won’t have to worry about getting them engaged and invested in it — they already will be. The process will be easier and more meaningful, and the result will be better if you simply invite the client in.

One more tip: before you settle on a final name, test it. You might not have the ability to run formal testing, but colleagues, friends, family, or random people at Starbucks, can still provide a lot of insight. It’s easy to get too close to a name. When you’re in the thick of it (and desperate to find the right name) you will almost certainly miss the most basic issues with a word. Case in point: the Ford Probe.

Now, you might be thinking: all of this sounds a little hard, doesn’t it? Do we really want to spend hours ransacking the thesaurus, only to have our hopes dashed by GoDaddy? Why not just stick to naming our slippers?

I would be lying if I said the thought hadn’t crossed my mind. But here’s the thing: naming your slippers is easy and fun, but it can start to feel limiting. You don’t get to dream about seeing that name appear on the list of “Most Influential Brands.” You won’t get to hear strangers use that name, or see it take its place at the top of a website, or on a building. You won’t get to imagine the way it’ll look on business cards, or (if the company is especially cool) Yeti tumblers.

No matter how much we gripe, deep down we know that naming someone else's stuff is a privilege. It's as if an author is letting you name the main character of their book. Naming allows us to help someone bring their idea into the world — to contribute to its story and, in doing so, become a tiny part of that story.